The quaint Seacoast town of Newmarket, New Hampshire, runs along the banks of the Lamprey River and Great Bay. New businesses found their home in the community’s historical textile mills, and a ride along the Route 108 corridor will lead you to a charming waterfront view. The downtown area has plenty of options for breakfast, lunch, and dinner—whether you’re on the go or looking to stay a while.

The Big Bean has grown to be a coveted spot for breakfast and lunch in town. The eatery, which opened in 2006, has made a name for itself through its scratch kitchen and speedy service—a necessity given its fan following. “We’re very, very quick,” says co-owner Jack O’Sullivan. “The line might seem long, but when you sit down, your meal is back to you within seven to 10 minutes.” Mufﬁns and biscuits are made in-house every morning. All the meals on the Bean’s menu are derived from the best-selling monthly specials and are named after popular songs, characters, places, and people. In the mood for a chorizo and egg taco? Try the Dwight. The Wouldn’t It Be Nice features scrambled eggs and falafel wrapped in a burrito. New England sports fans can even have a bit of the Patriots with their breakfast by ordering the Maroney quesadilla. “Of course it would be better to have the Tom Brady,” O’Sullivan says. “But the Tom Brady wasn’t as popular. 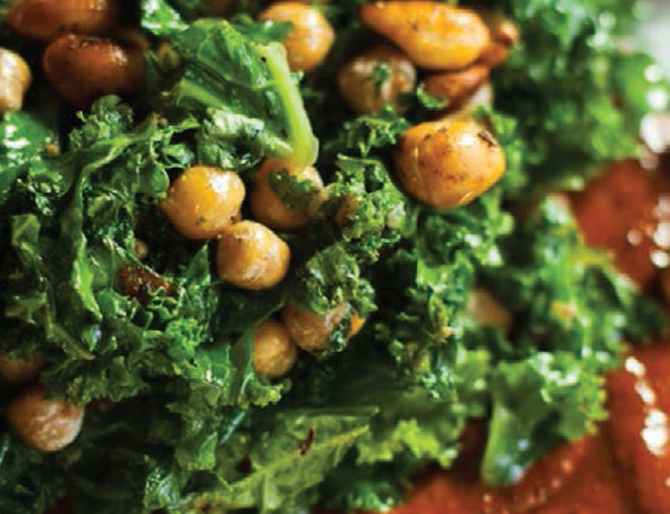 From land to sea, the Joinery focuses on bringing the freshest ingredients to their patrons from local purveyors. An ever-changing menu highlights a variety of veggies, fruits, dairy, and meats, with up to 90 percent of ingredients coming from 14 farmers, depending on the time of year. Executive Chef Brendan Vesey worked with Evan and Denise Mallett of Portsmouth’s Black Trumpet to open the restaurant in 2014. He offers what he calls new Southern dishes. “We take the old recipes of the South and try to stay true to their spirit without being bound,” Vesey says. “Southern cooking has always been a vegetable-based cuisine, but most that don’t know it think it’s all fried chicken and bacon grease with salty ham on top. I wanted to correct that perception.” Sunday brunch is loaded with unique and tasty ﬁnds, like the Kimchee Fried Rice with ginger, ground pork, carrots, greens, and eggs. At dinner, the Beer Battered Fish Sandwich is sure to please, as is the Warm Kale Salad with chickpeas, harissa, and peanuts. Don’t pass up the specials—“they’re usually the things the cooks are most excited about and feature a glimpse of what just came into season today,” Vesey says. 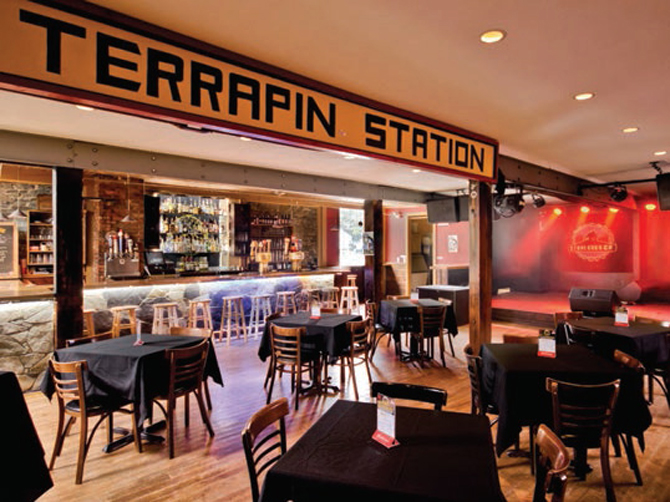 Since 1969, the Stone Church (located in a former church built in 1832) has been an eatery and music hall, featuring local and national talent six nights a week. “We try to bring in a variety of genres, so we can cater to as many people as possible,” says manager Abby Sapochetti. “What it’s created is an all-ages venue where people are eating and drinking, dancing, and listening to music.” While in for dinner and a show, try the Holy Tacos, with unique ﬁllings like falafel and crispy bacon topped with an addictive homemade chipotle sauce. The Heavenly Chargrilled Burger and Blessed Mexicali Burrito are also great, ﬁlling choices. The Stone Church utilizes seasonal produce from Dog Rose Farm in nearby Lee. In cooler seasons, expect bratwurst made with local sausage and hearty soups mixed with different ales and stouts. The sin (cinnamon infused) apple bourbon is great to pair with any meal. 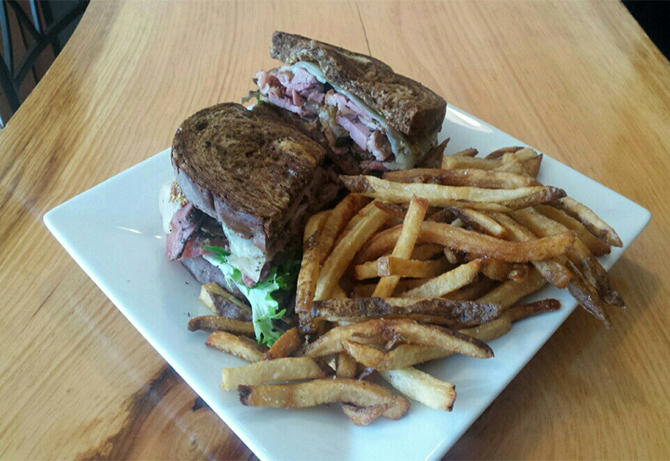 Given the success of his ﬁrst restaurant, The Big Bean, Jack O’Sullivan, along with business partners Tyler MacDonald and Eric Greenler, opened Oak House in 2015, which is conveniently located next door. “We’re really about being a local hangout, a conversational bar,” O’Sullivan says. “We want to see people talking to each other.” The menu caters to all styles and tastes, with options for meat eaters, vegetarians, and vegans. For the Brisket Grilled Cheese, the meat is smoked for 12 hours overnight, making it a fan favorite—with regulars coming in every day for it. On the other side of the spectrum, the Vegan Burger features a lentil patty that’s accompanied by caramelized shallots and cashew cheese. “We try to run the gamut so everyone with all these different eating styles can sit at the same table together,” O’Sullivan says. “We’re trying to keep up with the culinary world that’s always changing.” Pair either dish with one of the eight beers on tap from craft brewers or one of the restaurant’s 16 wine selections. 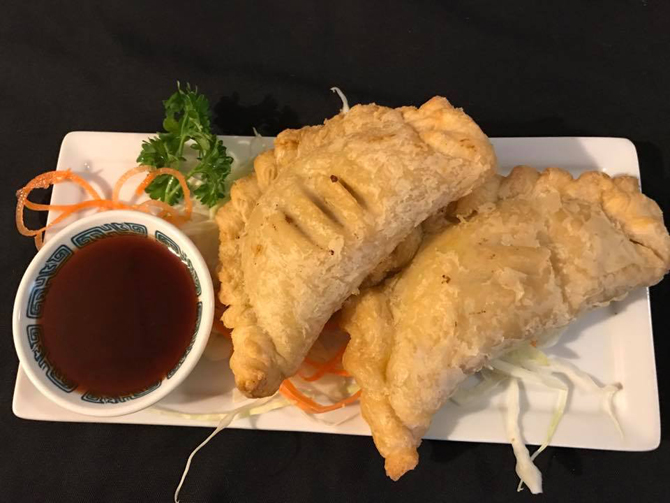 Newmarket native Air Vongsay opened Basil Leaf in 2014 as her ﬁrst solo venture. A previous proprietor of restaurants in Dover and Exeter, Vongsay brought her most recent eatery back to her roots. While her husband enjoys retirement, Vongsay utilizes his family recipes to create authentic Thai dishes. “We keep our food fresh and it’s family oriented,” she says. Mouthwatering classics include the Pad Thai, Drunken Noodles, and excellent Crab Rangoon. For a unique, tasty alternative, try the Larb, a spicy dish from Laos, Thailand. Fresh herbs, chili peppers, chopped onions, scallions, red and green peppers, bean sprouts, mint, and cilantro are mixed and cooked together, then placed on a bed of lettuce. Keep it traditional and add sticky rice to eat with the dish, as the Lao people do. You also can’t go wrong with any of the curry choices, but locals seem to favor the Yellow Mango Curry, which has sweetness from the fruit and coconut milk, with a crunch and saltiness from roasted cashews and onions. 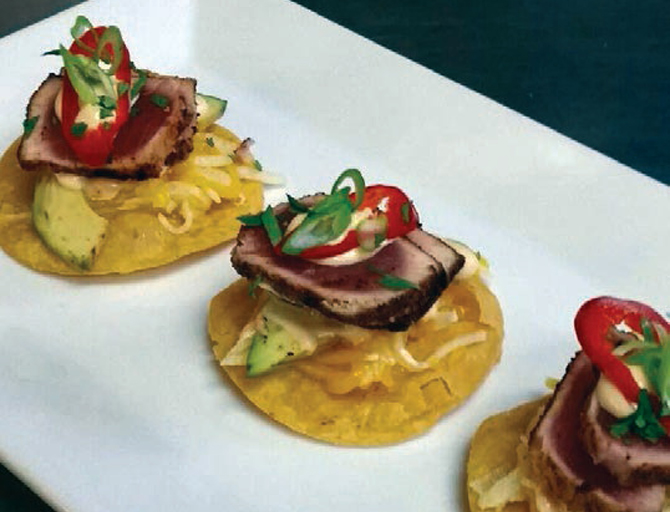 Creativity is key at Riverworks—where thinking outside the box is a tool often utilized to ensure the menu stays fresh, fun, and current. But, for regulars or travelers looking for some good ol’ hearty American cuisine, the menu boasts classic favorites that won’t disappoint. For the adventurer, try the Tuna Tostadas—seared yellowﬁn with jicama slaw, avocado, chipotle mango aioli, and pickled Fresno peppers. Keep yourself at sea with the Shrimp and Clam Tagliatelle, which is mixed with chorizo in a tomato broth and served with a grilled baguette for dipping, or head back to land with the BBQ Pulled Pork. The meat is cherry smoked, giving it that tender, melt-in-your-mouth texture, and is mixed with crispy onion strings for a bit of crunch. Live music lovers should hit the restaurant on Thursdays or Fridays, when they’ll be treated to local talent.