When you come to the 180 Restaurant & Bar, expect to be treated like family. Owners Brendon MacMahon and Graham Pellerin opened the eatery in 2009 and crafted a menu featuring only the types of dishes they’d want to serve to their loved ones. The North Hampton spot is cozy and casual—a great place to relax for lunch. 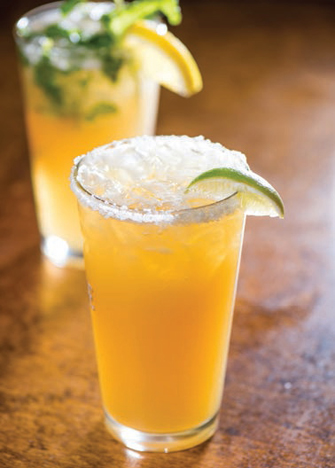 Grab a seat near the wood-ﬁred oven and check out the drinks. The crowd pleasers are often the 180’s take on classics, like the Skinny Margarita or a beer on tap. If you’re feeling adventurous, try the Ginger Smash. Muddled mint, ginger beer, Russell’s Reserve Rye, and simple syrup are shaken and poured for what Head Chef Dylan Anderson calls a whiskey mojito. “You’re playing with the ﬂavor of hard whiskey with the nice sweet taste of ginger,” he says. “Then with the mint and simple syrup, you bring it all together.”

Fired Up Wings are a must try. A 180 favorite, the bone-in wings are coated in a house marinade (think savory teriyaki sauce) and cooked in the wood-ﬁred oven. They’re then topped with caramelized onions and Parmesan cheese and served over a ﬂatbread pizza crust. Add goat cheese for a little coolness, and enjoy switching between the crunch of the ﬂatbread and the tanginess of the chicken. Or, go for the Jack Daniels Honey BBQ Wings, made bone-in or boneless. The dish is not technically on the menu, but regulars keep it on their list. The Nachos are also a great choice. Each layer of chips is coated with cheese, jalapeños, and black olives, and every bite packs a punch. 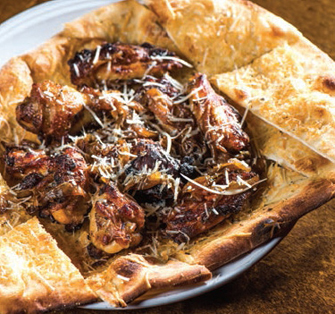 The Cobb Salad offers a fresh take on a traditional menu item. Chopped chicken, tomatoes, hardboiled eggs, avocado, bleu cheese, and bacon are neatly lined through the fold of romaine lettuce leaves, then topped with your choice of dressing.

Known for its pizza, the 180 offers over a dozen combos for all tastes. “I’ve been told by, I don’t know how many people, that we have the best pizza they’ve ever tried,” says Anderson. Pies are cooked in the 600°F to 700°F wood-ﬁred oven for about six minutes, and crusts range from ﬂatbread to thick. Carnivores should go for the Seacoast Meat Pizza. Using a family recipe for the red sauce, the pie features homemade meatballs, Italian sausage, pepperoni, bacon, and ham. On the lighter end of the meat spectrum, The Rockingham is made with a garlic oil base, maple bacon, caramelized onions, mushrooms, and goat cheese. 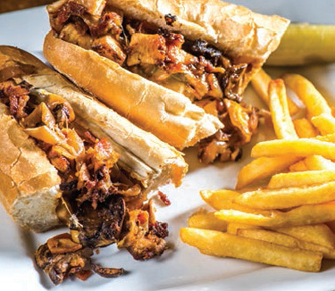 The 180 offers a large selection of sandwiches, wraps, and burgers, like The Lafayette, which gives you a little bit of everything: chicken, bacon, caramelized onions, garlic puree, honey mustard, and cheese, stuffed into a toasted sub roll. The signature 180 Burger is served on a ciabatta roll with lettuce, tomato, and caramelized onions. “The only complaint I’ve ever had about this burger is it didn’t come with enough napkins,” Anderson jokes. 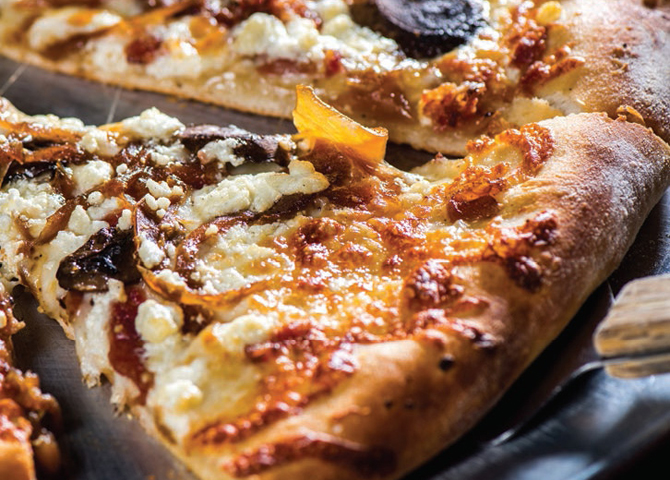 For something a little different, try one of the weekly specials for new apps, soups, salads, pizza, pasta, and entrees. Past creations have included a Steak and Cheese Pizza, and the Lafayette Pizza (a new take on the 180’s sandwich). In the summer, Anderson works a lot with seafood, so look out for a Lobster Flatbread, with chives, parsley, fontina and mozzarella cheese, lobster chunks, and herb garlic butter. 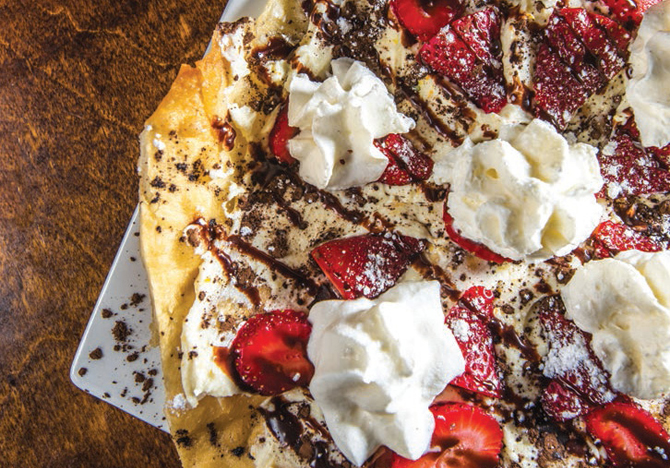 Anderson will occasionally run dessert specials, and is always up for creating something new to satisfy your sweet tooth. Ask about the Creamy Fruit Fried Dough. Sweet ricotta is spread over a piece of fried dough, which is then topped with strawberries and ﬁnished with confectionary sugar and chocolate sauce, a satisfying end to the meal.