As you enter The Poynt in downtown Newburyport, your eyes will be drawn to the 360-degree bar in the center of the room. Rolling pins line a wall next to the pizza oven and cooks dance around one another in an open kitchen. Proprietors John and Laura Wolfe, who also own Brick & Ash in Newburyport, as well as more restaurants in Massachusetts and California, incorporated design elements to honor John Farley Clothiers, which formerly occupied the space. The backs of booths are upholstered with fabric used for men’s shirts and the old brick leading into a private dining area, The Wolfe’s Den, remains lettered with Farley’s legacy.

The menu offers classic American cuisine with a twist. “It’s a little bit of a melting pot,” says Executive Chef Andrew Swanson. “We don’t stick to the traditional rubric when we conceptualize dishes. We have the freedom to change things up. It really leaves it open for what we think guests will like most.” 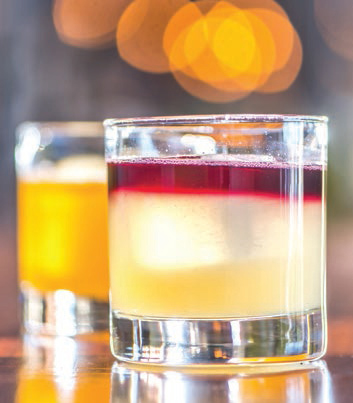 When in for lunch, consider ordering a cocktail. Bar Manager Brett Henderson barrel ages and infuses many of the liquors on-site. The Steve McQueen is made with vanilla-infused Rittenhouse Rye, Mathilde pear liqueur, lemon juice, and orange bitters. Or, go for Bad Intentions. Tanteo jalapeño tequila, habanero agave nectar, and fresh cilantro, sage, and citrus are blended and poured over a large square ice cube in a rocks glass. Taylor Fladgate Ruby Port is then ﬂoated on top.

Start the meal with the Fried Calamari, squid rings breaded in buttermilk batter, along with cherry peppers, cooked, and tossed in a Thai chili gastrique. They’re served on a bed of greens dressed in Asian vinaigrette for an enticing blend of sweet and heat. Sriracha sauce and a sprinkling of toasted sesame seeds complete the dish. 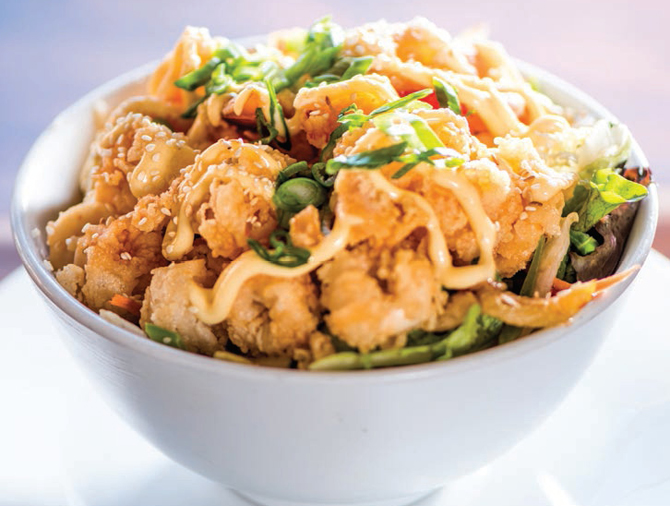 Delving into a somewhat untapped market in Newburyport, The Poynt also offers a daily rotating sushi special. “There aren’t a lot of restaurants that offer sushi, unless they’re Japanese,” Swanson says. “We always look for what we can do to make us different from the next restaurant.” For a creative take on sushi, try the Kung Pao Roll, Thai chili shrimp ﬂecked with crushed spicy peanuts and drizzled with a lemon chili aioli. Or, go for the Crab Rangoon Roll, a play on the Chinese-American staple. A crab and cream cheese ﬁlling with duck sauce is wrapped in seaweed and white rice, then covered with crushed crunchy wanton wrapper breading. 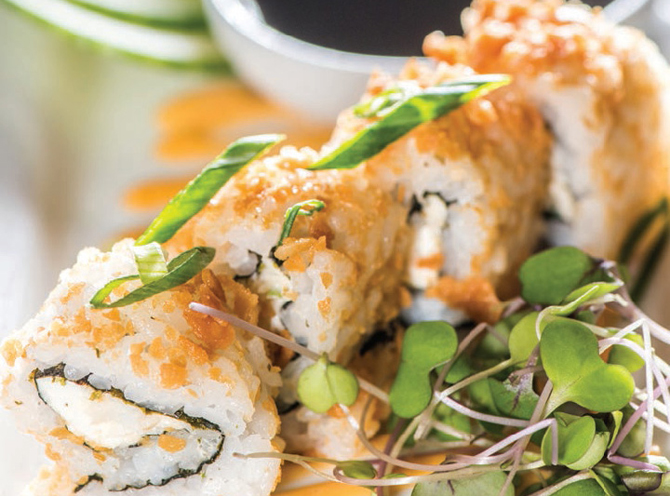 A satisfying lunch option is the Brown Butter Lobster Roll. Rather than the usual mayonnaise, fresh-shucked lobster chunks are tossed in brown butter and herbs, then piled high on a hot dog roll. A side of fries and fennel slaw complete the experience. The Beer Battered Fish and Chips is also sure to please. Swanson works with New Hampshire Community Seafood to get fresh, sustainably caught white ﬁsh that changes week to week based on what’s caught by local ﬁshermen.

Grab a seat at the pizza bar and you can watch the creation of your pie from start to ﬁnish. The wood-ﬁred oven ensures an extra crispy thin crust. The “Wooster Street” White Clam Pizza is inspired by Frank Pepe Pizzeria Napoletana, whose ﬂagship restaurant is on Wooster Street in New Haven, Connecticut, and features freshly chopped clams, Romano and Parmesan cheese, bacon strips, oregano, chili ﬂakes, and extra virgin olive oil.

Deﬁnitely save room for dessert, like one of the House Made Individual Pies, which are baked in a four-inch cast iron skillet and made with seasonal local fruit and topped with a scoop of vanilla ice cream and homemade whipped cream. Or, take a bite into a Louisiana classic with the Brown Bag Beignet. Fried dough is tossed in confectionary sugar, accompanied by a chocolate ganache sauce and presented in a brown paper bag, just like you’d see in New Orleans.