In Portsmouth, a trip down memory lane just might mean a jaunt around the Rotary. There, nestled beside the Best Western hotel, you’ll find the aptly named Roundabout Diner. Opened by former Muddy River Smokehouse owner Dan Posternak in 2011, the Roundabout shimmers with ’50s Americana from the outside in, all the way down to requisite race-script arrow sign, checkerboard floors, and plush vinyl booths. It’s enough to make this ’90s grunge kid wish he’d commandeered Doc Brown’s DeLorean. 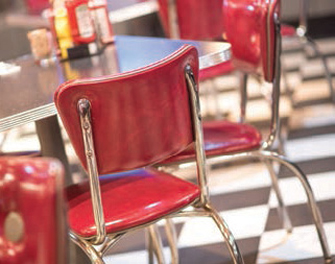 But for Gary Shevenell, Roundabout’s longtime catering director, that sense of authenticity is about more than sounding the bells and whistles of a bygone era. After closing Muddy River’s Eliot location in January 2010, Posternak and Shevenell undertook months of R&D—gauging sliced versus thick-cut corned beef, tasting 16 different kinds of bacon—with the goal of creating a menu that was as authentic and replete with New England–sourced ingredients as possible.

“It was about taking as deep a dive as we could, to figure out what we wanted our food to be,” Shevenell says. “It’s about quality, yes, but it’s also about integrity, and that’s something that wouldn’t be possible if it weren’t for the amazing chefs and management team members that we’ve had. 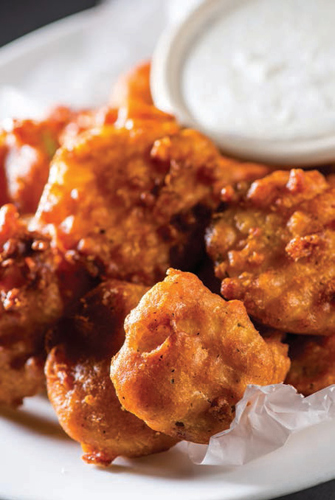 ”While breakfast is served all day (omelets abound, of course, like Chili and Cheese and Mediterranean), it’s worth coming by midday to enjoy the diner’s equally expansive, gloriously sandwich-centric lunch offerings. One flip through the menu should bury any notions you might’ve had of a productive afternoon—this is what you eat when the devil on your shoulder gets his way. And oh, is it divine.

For starters, a must is the signature Fried Pickles, beer battered and browned to puffy perfection, with an incredible garlic-dill sauce too delicious to ignore. The portion is mountainous, rendering the underlying novelty newspaper sheet near translucent. Nobody does them better, and it’s a wonder would-be rivals ever try at all.

You can virtuously balance the grease with green, like the Spinach Salad tossed with sugar-cured bacon, tomatoes, dried cranberries, blue cheese, and candied walnuts. Dressed in homemade balsamic vinaigrette, it’s a bed of greens even the heartiest of carnivores can lie in. The mixed lettuces in the Asian Salad are tossed with scallions, veggies, slivered almonds, and toasted sesame seeds. 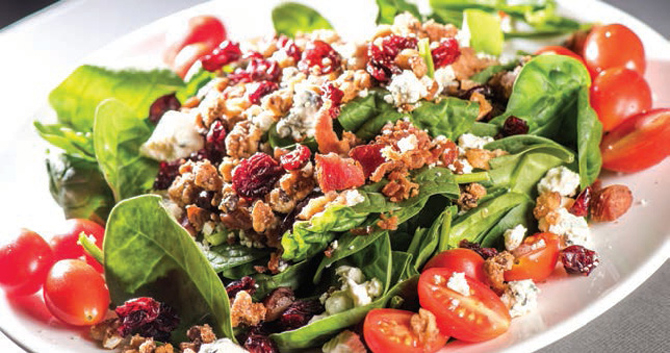 Settling on a sandwich may feel like picking a favorite Beatles album: they all sound incredible, however much the themes and flavors might vary. First up, the Roundabout Corned Beef Reuben, the meat of which is cured and cut in-house. Buttressed by a barricade of waffle fries (a guilty pleasure in its own right), this is the peak of meal decadence. And no, we don’t regret it. This cured meat is used in breakfast dishes too—it’s the base for the signature slow-cooked Corned Beef Hash, available as a side, and in omelets and benedicts.

Meat, fish, and veggies all get focused attention in the sandwich department. Cheddar and Russian dressing join tomatoes and grilled artichokes on thick-cut sourdough bread for the Artichoke-Tomato Melt. Local fish coated with panko crumbs is the star of the Fried Haddock Sandwich, served on a toasted bun. Ramp up your game with sides like Sweet Potato Fries, Mac and Cheese, and Homemade Stuffing. 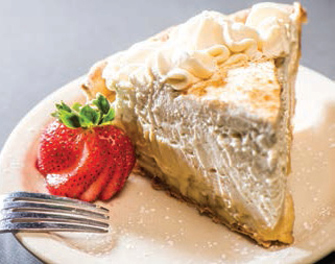 If, like us, you sat down counting the seconds till dessert, be sure to pace yourself on the staples accordingly (remember: diner fare always makes the best leftovers). Pastry Chef Ashley Schaefer delivers sweet nirvana again and again. The ever-rotating selection of scratch-made pies has long been Roundabout’s sweet-course calling card. The airy, substantial Banana Cream Pie is a heavenly experience. Then there are those gorgeous layer cakes—Peanut Butter Cup, Boston Cream, Oreo Mousse. 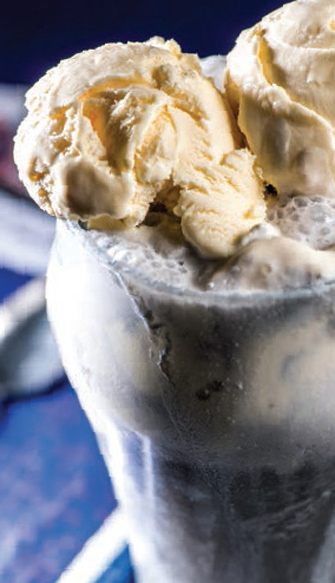 But no diner trip is complete without a good old-fashioned float, so finish off your gut-bursting experience with a Purple Cow, with grape soda in place of root beer. The Creamsicle-like combination is almost off-putting in its delightfulness. (We knew it would be good, but this good?) In short, and down to the shape of the glass itself, it’s the perfect exclamation point to a positively voluminous lunch excursion.