Gin is hot. Gin is golden.

“Gin is resilient,” Dave Brown writes in Gin: The Manual. “It knows that people will eventually come to their senses and appreciate it for what it has always been—a spirit of extraordinary complexity and depth. Brown’s is one of at least a dozen volumes published in the past three years devoted to the juniper-infused spirit that had a heyday in the 1920s. It fell out of favor during the vodka and sweet cocktail craze of the 1990s, but it’s making a decided comeback.

This is certainly apparent in New Hampshire. Five years ago, there was one craft distiller in the state, Flag Hill; today there are nine, several producing gin. “The more of us there are, the more opportunity to raise awareness,” says Brian Ferguson, owner of Flag Hill. “It’s additive. It makes the industry better. And if someone comes in and wants to know where else to go, we can tell them, if you’re heading north, go to Tamworth. If you’re heading west, go to Sweetwater. If everybody is making good spirits, it works out for everybody.”

According to the United States standards of identity, gin “is a product obtained by original distillation from mash… or by mixing neutral spirits with or over juniper berries and other aromatics… It shall derive its main characteristic ﬂavor from juniper berries.

”What makes New Hampshire gins unique compared to other states is that the original distillation, the neutral spirit base, must be produced in the state. New Hampshire gins all use locally grown produce for the initial distillations, before distilling it into gin with juniper and other botanicals. Botanicals refers to plant-based ingredients like herbs, spices, seeds, fruits, and vegetables used to create unique ﬂavors.

It Started with a Cucumber
Gin had seen more popular days when Scottish spirits company William Grant & Sons introduced Hendrick’s Gin to the global bar scene in 2000. Brand Ambassador Mark Stoddard says, “When Hendrick’s launched, nothing new had happened to gin. The ﬂavor proﬁle seemed dominated by juniper, which really turned off a lot of drinkers.”

William Grant felt the gin category needed some revitalization. They brought in Steven Grasse, who later started Tamworth Distilling. “My main role was creating the brand,” he says. “I wanted to have the garnish be cucumber, and that inﬂuenced the cucumber and roses. Gin is a very botanical garden experience, and cucumber seemed more relevant to me than the traditional lime.”

William Grant’s master distiller Lesley Gracie created a new kind of gin using two distillations—one with juniper and other botanicals, and the second with cucumbers and rose petals. Stoddard explains, “In order to retain that fresh green cucumber ﬂavor, you can’t use heat. Lesley discovered a way to distill cucumbers in a vacuum at near freezing. Hendrick’s transcends the gin category. It brings in new people who think they don’t like gin and has them become gin drinkers.”

This in turn has opened the door for micro craft distilleries such as Tamworth, Flag Hill, and Sweetwater. Grasse predicts, “Hendrick’s will become the global gin brand. Other big brands will fade away, and everything else will be local.”

These New Hampshire distilleries all have tasting rooms, so great local gin is only a few miles away.

In 2004, Flag Hill Winery founders Frank and Linda Reinhold opened the ﬁrst distillery in New Hampshire since Prohibition. In 2015, Brian Ferguson purchased it, after working there for a couple years. Karner Blue Gin, named for the New Hampshire state butterﬂy, is infused with the requisite juniper, plus eight other botanicals, including cardamom, lemon and orange peel, and cinnamon. “It took us about nine months to develop our gin,” Ferguson says. “There’s some alchemy to it, the way all the botanicals play with each other. We put a lot of focus on balance, instead of a punch in the mouth.” Flag Hill’s gin starts with a neutral spirit they make from apples from Apple Hill Farm in Concord, New Hampshire. The resulting spirit, Ferguson says, “has a gentle buttery-ness. My favorite quote about fermentation is that it’s the art of fruit rotting gracefully. I love that. 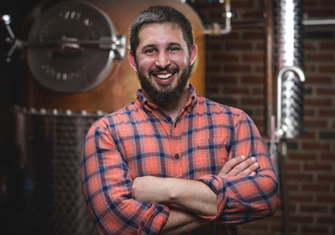 ”There are two methods of infusing the neutral alcohol with the botanicals that turn it into gin. With vapor distillation, the vapor of the distilling alcohol passes through essentially a teabag full of the botanicals; alternately, the botanicals are added directly to the liquid, then strained out. “Neither is better than the other,” Ferguson says. “Tasting is perception based. I’ve done both and have better luck making a softer gin with direct maceration. Every fermentation, no matter how speciﬁc we are, is a little different. At the end of the day, it’s a living creature that’s going to do what it wants to do, and there’s something fun about that.”

Boston residents Patti Moreno and Robert Spruill inherited a farm in Winchester, New Hampshire, in 2011. Both had a background in ﬁlm and media. Having the farm inspired a career change. “Both of us are into growing things and gardening,” Moreno says. “We wanted to do something in the farming realm. Rob learned to distill from his grandfather in North Carolina.” So, in 2015, New England Sweetwater Farm & Distillery was born. 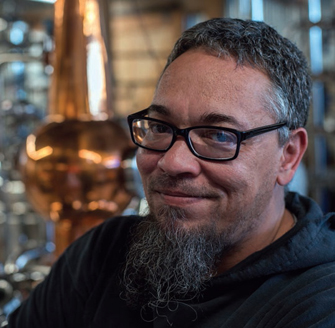 Their business plan included Ashuelot Vodka, made from apples from their orchard and local russet potatoes. Gin was not part of their original plan, however, due to Spruill’s teenaged “gincident” involving a stomach-churning over-consumption of Tanqueray. “It totally turned me off gin for the rest of my life,” he says.

Then Moreno went for a walk on their property and made a discovery. “We had tons of juniper berries growing all over the place,” she recalls. “‘We have to make gin,’ I told Rob. I really like gin; I love all the different ﬂavors and things you can do with it.”

“I’ve been married to the same woman for 20 years,” Spruill says. “I generally do what I’m told. Patti’s like, make a gin you like. I never considered that was possible.” He started with their vodka, vapor-infusing it with their juniper berries and other botanicals, including angelica and orris root, medicinal plants good for digestive issues. “I ﬁgured we would put in stomach palliatives right from the start,” Spruill says of Sweetwater’s Ashuelot Gin. “It turned into this really delicious, unique gin, super light, super clean.”

Tamworth Distilling founder Steven Grasse knows his spirits. He created a rum, Sailor Jerry’s, which he sold to Scotland’s William Grant & Sons, who then hired him to launch their Hendrick’s Gin(see sidebar, “It Started with a Cucumber,” page 119). He’s done global marketing for Guinness, Narragansett beer, Gallo wine, and others, and has written a book on early American libations, Colonial Spirits. He launched Art in the Age of Mechanical Reproduction to produce unusual spirits like beet root vodka. 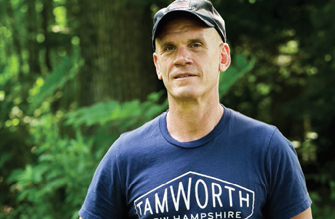 Grasse picked the town of Tamworth, New Hampshire, to establish a distillery in 2015 “for the water, the natural foraged ingredients, and it’s just ﬂat-out beautiful.” The Art in the Ageline is now part of Tamworth. “I didn’t want to contract to make anything anymore,” Grasse says. “I want to take our experiments further. The money we earn from marketing and packaging people pays for the distillery. I’ve always had a reputation for pushing the envelope and being different.”

To that end, Grasse hired Jamie Oakes as distiller, Matt Power as resident biochemist, and Charlene Hearn as botanist. “Because that’s what distilling is,” Grasse says. “They’re alchemists.” His brother, David Grasse, is general manager of the distillery. As for his role? “I’m the visionary owner, very involved in everything, to the point where I’m a pain in the ass to everyone.

”Tamworth currently has two gins, bottled in hexagonal-sided bottles, reminiscent of a honeycomb. Pale gold Tamworth Garden Apiary Gin has a touch of honey and poplar buds and Flora Gin includes clover, elder ﬂower, geranium, and violets as its botanicals. Two more gins are in the works. “We wanted a facility where we could create new and interesting liquid proﬁles,” Grasse says. “To boldly go where no distiller has gone before.”