“Do you like apples?” Matt Damon’s character Will Hunting asks arrogant grad student Clark during a scene in 1997’s ﬁlm Good Will Hunting. When Clark hesitantly answers in the afﬁrmative, Will holds up a piece of paper with a phone number—that of a woman they had each been trying to impress moments before. “How do you like them apples?” Will smirks with a classic Boston accent, forever popularizing this early 20th-century expression.

Apple lovers could argue that the regional pride this particular 1997 movie scene evoked may have helped to spur the already growing movement to rebuff ﬂashier imports in favor of more sustainable, ﬂavorful, locally sourced food.

However, botanically speaking, the only apples truly native to this region were the acerbic crab variety. According to the New England Apple Association, the earliest record of cultivated apples brought from the Old World to the New appeared in 1623, just three years after the landing of the Mayﬂower. Since then, the region has produced its own set of cultivars (cultivated varieties), starting with Roxbury Russets (1635, Massachusetts) and followed by Black Oxfords (1790, Maine), Nodheads (aka Jewett’s Reds, early 1800s, New Hampshire), and more.

HISTORICAL CONSUMPTION
Owing to a lack of potable water, colonial New Englanders used most of the apples available (the native crabs, the sweeter eating apples brought from abroad, and their eventual hybridized offspring) to make mildly alcoholic cider that would hydrate the whole family all day long. “Using apples for cooking was a secondary proposition,” explains Erik Wochholz, curator of historic landscapes at Strawbery Banke Museum, which maintains three heirloom orchards. The orchards preserve historic apple varieties in danger of extinction, and the harvests are used by local brewers to make traditional gruits (sour beers) and hard cider. In addition, the orchards serve as part of the living museum experience, used for demos on growing and maintaining the fruit.

The best eating apples, Wochholz says, were coveted table fruit, or “dessert in and of themselves,” like the Hubbardston Nonesuch, found in Massachusetts in 1832. The sweetness of this oversized speckled apple also lent itself to cider making. The still-popular Baldwin was discovered in Wilmington, Massachusetts, in 1740 and can be found in many Seacoast orchards today.

The mealier apples were used either fresh or dried by the ﬁre for pies, sweet ones on occasion, but just as often in savory ones as the centerpiece of the big, midday meal. For Strawbery Banke’s demonstration on hearth cooking, staff refer to a recipe for Onion Pye, which appeared in the 1747 volume The Art of Cookery, Made Plain and Easy, by lauded English cookbook author Hannah Glasse. Nutmeg, mace, black pepper, and salt season layers of onions, potatoes, eggs, and apples, all ﬁt into a pastry crust. “The crust was likely inedible, made more of salt than ﬂour, to preserve the pie well over several days in the absence of refrigeration,” Wochholz says, noting that the heirloom apples stand out as the most interesting ingredient in the dish.

Today, Maine, Massachusetts, and New Hampshire combined have over 7,000 acres of registered apple orchards. McIntosh account for about two-thirds of the crop; the next top sellers are Cortland, Macoun, Empire, Gala, and Honeycrisp. And, while their natural sweetness makes apples a prime ingredient in local desserts (including pies, cakes, and crisps), Seacoast chefs are embracing savory apple applications across their cooler weather menus. They might use them in traditional combinations with pork and savory herbs like sage, rosemary, and thyme or more exotic ones like Latin-inspired lamb.

CHEF'S CHOICE
Boston-based food writer Amy Traverso, author of The Apple Lover’s Cookbook, groups apples into four distinct categories for cooking. Firm-tarts ones like Granny Smith and Roxbury Russets hold their shape when cooked, good for recipes that would beneﬁt from “a bit of acidity and bright ﬂavor.” Apples like Braeburn, Ginger Gold, and Pink Lady work well in savory and sweet dishes that need ﬁrm but sweet fruit. Tender-tart apples like Macoun or McIntosh are best for soups and sauces. And, tender-sweet varieties like Gala and Fuji are best for salads or quickly cooked dishes. 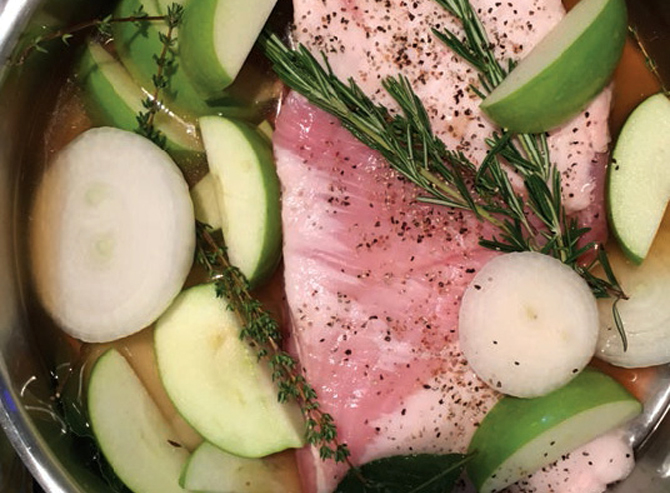 Former Chef Justin Rexroad of Sonny's Tavern in Dover grew up in central Massachusetts surrounded by apple orchards. If forced to choose, he names Granny Smith apples, which he slices and serves as a base for a pork belly dish, along with Vidalia onions and apple cider. He braises whole 12-pound bellies for hours in the restaurant’s basement kitchen, which produces a rich, sweet and sour aroma that wafts up through the building, triggering hungry questions about its source from the proprietors of the neighboring shops. From the basic braise, he cools the bellies and ﬁnishes them in a variety of ways, including one with Korean pepper oil, another with maple sugar candy, and a third with a blackberry cognac sauce. 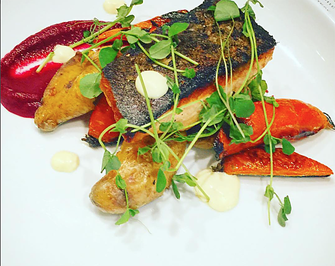 Otis Restaurant is a small, modern American eatery in Exeter, New Hampshire. Chef-owner Lee Frank says he’ll use any apple that comes from Applecrest Farm’s Orchards in nearby Hampton Falls. He truly does not have a go-to apple for his savory dishes. “You decide what to do with an apple based on two things: texture and the balance of acidity and sweetness,” says Frank, who has manned the stoves at Arrows in Ogunquit, Maine, and, most recently, at Anneke Jans in Kittery. Frank might pickle a crisp, tart apple, serving it with a rich braised pork dish or using it to make a mignonette to sit alongside raw oysters. With a sweet variety that will break down during a long cooking process, he’ll make a smoked apple butter, noting that the sweetness rounds out the smoke when plated with duck conﬁt or poached razor clams. 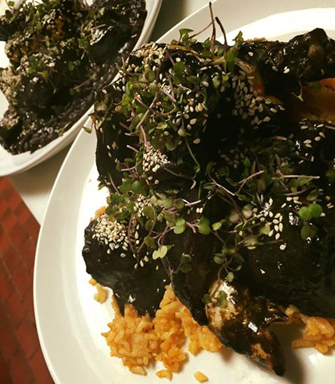 In Portsmouth, Chef David Vargas of Vida Cantina makes no bones about declaring McIntosh and Honeycrisp his two favorites. In his modern Mexican restaurant, Vargas will use these apples instead of dates or raisins in a rich mole sauce, ﬁrst lightly smoking and then charring them over an open ﬁre so that hey are black on the outside and soft on the inside. Vargas says the apples get pureed into the sauce called Mole de Manzana (apple in Spanish), which he serves with braised local chicken throughout the fall.

So yes, like ﬁlm foes Clark and Will, Seacoast chefs do indeed like apples, though in the truest sense of the word. And as dishes both sweet and savory keep ﬂying off their menus, it’s also fair to say that eaters like them apples too. 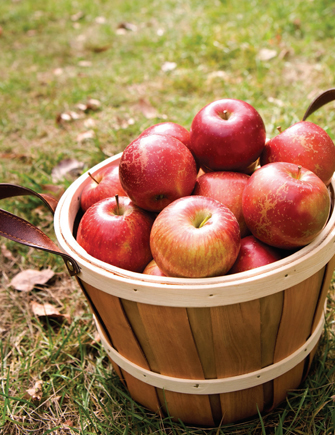 SOURCING THEM APPLES
You can ﬁnd locally grown apples at these orchards, many with pick-your-own options in the fall.