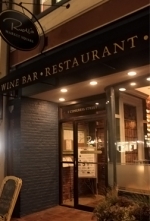 For the past five years, Rudi’s Portsmouth has offered tempting menus of American food for lunch, dinner, and Sunday brunch. This past June, after months of renovations to the former Little Timber Bonsai Nature Store, co-owners Brook Gassner and Keith Prince opened an addition, Rudi’s Market Square.

While the two spaces have separate addresses (the original Rudi’s is on High Street), you can get to one from the other – but you can also enter each from an independent entrance. Market Square is a wine bar, and there’s an impressive selection of wines by the glass and by the bottle, organized by grape. Choose from several Pinot Noirs or Chardonnays, among other white and red options, as well as a varied list of blends from Spain, California, Italy, and France. There’s also beer on tap and several cocktails and cordials.

The atmosphere is calm and laid back, with plenty of exposed brick. The menu includes the same eclectic mix of starters and  entrees offered at the main restaurant. Fig Ravioli includes walnuts and mascarpone, perfect with a glass of wine. Fried Brie comes with a cherry ginger compote and red grapes. These are also offered on a late night menu. Entrees include a balance of seafood (Grand Bank Swordfish Loin), poultry (Apple and Chorizo Stuffed Quail), and meat dishes (Grilled Ribeye with Smuttynose Porter demiglace).