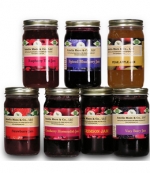 I have a weakness for homemade preserves. Whenever I’m at a market, I check out the shelves for those local goodies, in search for something unusual. I hit gold when I discovered Amelia Maes & Co., with their line of hot pepper jams and jellies. Raspberry Thai Jam caught my eye – and my taste buds, since raspberry is a favorite in our house. It’s got the expected fruity sweetness of raspberry jam – and then a subtle kick from Thai and habanero peppers, plus a savory edge from red bell peppers.

Dagne (pronounced Donni) Goodwin founded the company in March of 2009. The Christmas before she had participated in a holiday craft show, selling over 150 jars of her homemade jams – and her husband Keith’s special Goodies Barbecue Sauce. When she was laid off from her human resources job a few months later, she capitalized on that success, and had her home kitchen licensed to produce jams and jellies, and the sauce. Keith is the chef behind that item (“He won’t give me the whole recipe,” Goodwin laughs). She included sweet jams like Spiced Blueberry (with cinnamon) and the best-selling Crimson Jam (with raspberries, strawberries, and cherries).

But the hot pepper line is among the most popular. In addition to the Raspberry Thai, there’s Golden Hot Pepper Jelly, with yellow bell peppers, speckles of red Thai peppers, and garlic. It’s great with cream cheese or goat cheese on crackers, and as an easy glaze for chicken. The Pineapple Habanera Hot Pepper Jelly packs a bit more heat, nice with salmon or pork. While not part of the pepper line, Cranberry Horseradish has its own bit of heat. It’s a terrific condiment in a turkey sandwich.

Amelia Maes line is available at area markets, online, or at the Goodwin’s house (call in advance). Each 8-ounce jar is $6.50; the 12-ounce bottle of barbecue sauce is the same price. Goodwin is fun to talk to, with lots of creative ideas for the different hot jellies. I’m looking forward to making a spicy raspberry Thai vinaigrette for a spinach salad.