Cocktail of the Month by Lisë Stern / December, 2012 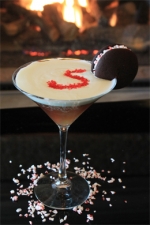 Sometimes, a cocktail can be a meal in itself – or a dessert in itself. Seaglass Restaurant’s Winter Whoopie Martini lets you have your cake and drink it too. The blend of crème-y liqueurs include mint and chocolate, a pairing that goes particularly well during the holiday season. And the drink has the ultimate garnish – a seasonal peppermint candy whoopie pie made by former Chococoa Baking Company in Newburyport.

1. In a small bowl, use a whisk or electric mixer on medium-high speed to whip the cream until soft peaks appear; be careful not to overbeat. While continuing to beat, add crème de menthe and beat just until incorporated. Set aside.

2. In a cocktail shaker filled with ice, combine vodka and both crème de cacaos. Shake well until blended, then strain into a martini glass. Top with the reserved whipped cream and garnish with red sugar and a whoopie pie.