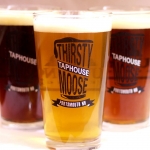 “We have 166 taps between the three bars,” says Joe Kelly, owner and visionary of Thirsty Moose Tap House in downtown Portsmouth, which opened last July. The upstairs bar was first to open, followed by the downstairs events area, which caters to anyone looking for great live music, private parties, and more of a lounge atmosphere. Kelly, a serial entrepreneur, had the idea for this concept after a trip to California and a visit to the well-established Yardhouse. “I truly expected someone else to build this type of restaurant sooner,” he says. “Portsmouth is the best town in the area to live, work, and own a business. Fortunately, the timing was right and we secured an awesome space.”

With the amount of beers on tap at the restaurant and the explosion of interest in craft beer, Kelly is quick to point out that it’s the combination of atmosphere, food, and beer that bring the customers back. However, he does give extra credit to the beer. “The large selection allows us to draw the craft beer drinker and the average consumer. We offer everything from Bud Light to North Coast Old Rasputin Russian Imperial Stout. We don’t want to alienate anyone.” To help facilitate this, The “Moose” (as it has become affectionately known to locals) offers sample paddles, which encourage customers to try something new every time they visit.
While any attention paid to a global conglomerate macro-brewer may offend the hardcore craft beer drinker, the selection of beers at the bar is constantly evolving, as local breweries discover new recipes and breweries from afar ship their beers to New Hampshire. “We are definitely loyal to vendors that work closely with us, but we do not keep beers on tap that sell slowly,” says Kelly. “We are always willing to try something new and I like to keep the beer forever rotating.” And he thinks there is room to grow. “Craft beer is huge right now, but it has a long way to go on the East Coast in comparison to the West Coast. We will most likely add 10 to 20 draft lines at a time, and we can easily accommodate 50 more.”