The Art of Craft

Gather some grains, herbs, or potatoes, add water, and heat.

New England is just the place for making craft spirits. We have farms that can supply the grain and botanicals, a long history of distilling, and good old Yankee ingenuity, because if you think creating a great gin, whiskey, or rum is something you just do in your kitchen, there are at least four micro-distillers who will tell you there’s a lot more to it than that. These new distilleries create spirits with balance, reﬁnement, and a delicious complexity. And they all started from scratch, some right down to building their own stills, creating unique recipes for spirits than can be enjoyed neat or in your favorite cocktail. 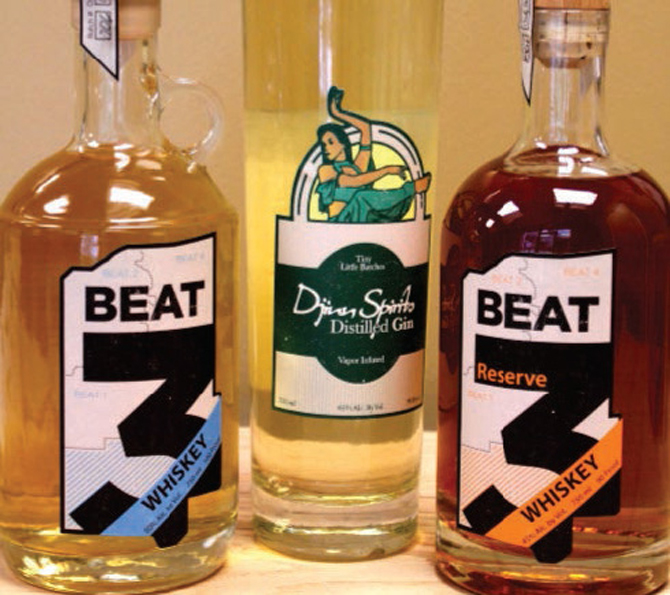 “Distilling would be fun...” Cindy Harthcock, a nurse, had just a little bit of home distilling in mind when she made that statement to her engineer husband, Andy. A few years after that musing, Andy played the word “djinn,” which means genie, in Scrabble and now, the genie is out of the bottle on their Gin, White Whiskey, and Reserve Whiskey. The couple attended a week-long distilling class in Seattle in 2012, which reafﬁrmed that they were on the right track. “We knew we were developing a skill set while we were doing research and designing, “ says Andy Harthcock. “We came back excited to start. We also did online classes in topics like Spirits Appreciation. They asked us to go buy four nips of different vodka and submit notes, which were critiqued.

”Djinn Spirits started with White Whiskey. “It was the easiest to make with a still and there’s a place for a well-done white whiskey. When spirits come straight from the still they don’t have a pleasant ﬂavor but we ran it through a charcoal ﬁlter, which takes off all sorts of off-ﬂavors and leaves the malty sweetness,” Harthcock explains. Gin, he says, is another spirit that can get to market quickly. While the primary ﬂavor has to be juniper, the distillers experimented with many ingredients to get a ﬂoral, but not dominantly so, ﬂavor. Hints of elderberry and elderﬂower, citrus from lemon and grapefruit, and a hit of Grains of Paradise (a spice in the ginger family) adds an earthy, peppery note, similar to licorice. Since the botanicals are introduced by vapor rather than boiling, the aromas are trapped. “We get super results,” says Harthcock. “You can’t directly taste the elements but it all goes into the whole ﬂavor of the gin.”

As for the Reserve Whiskey, charred oak barrel aging yields notes of butterscotch and vanilla. The most recent addition to their family is Krupnik. “It’s a spiced honey liqueur based on a 500-year-old recipe with cinnamon, cloves, black pepper, citrus, and 180 pounds of honey from southern New Hampshire,” Harthcock says. The distillers also offer classes so you can learn to make your own spirits and whiskey or just deepen your knowledge of how to enjoy and appreciate the craft. 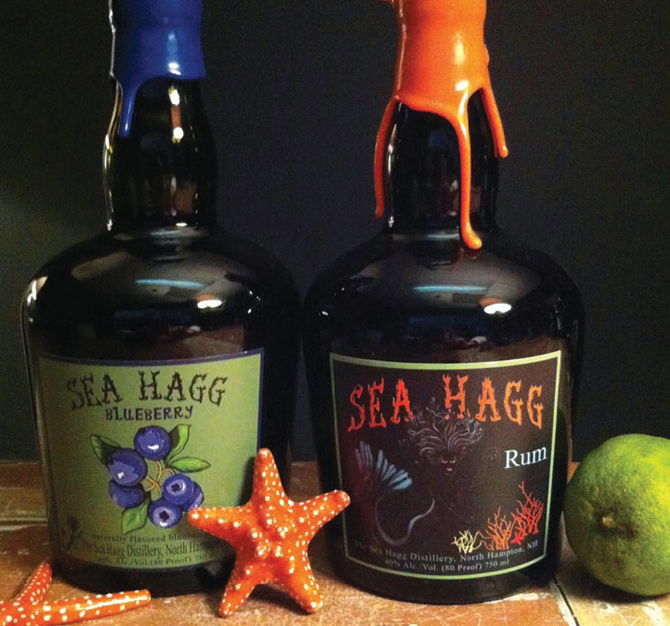 Sipping a great spirit can inspire creativity. And sipping rum on a Caribbean vacation inspired Heather Hughes and Ron Vars to open a rum distillery in July 2012, and they’ve been distilling and aging their molasses-based rum, including fruit infused versions like blueberry, ever since. A traditional copper alembic pot still is the centerpiece of Sea Hagg’s warehouse distillery. Apart from the molasses, ingredients are locally sourced and each bottle is hand dipped in wax to seal. Vars says that some of their later productions are getting more interesting. “The apple brandy is coming of age and we continue to make our eau-de-vie. That might be my favorite, but that apple brandy sold out all 150 bottles.”

They’re also making a Poitin, an Irish moonshine made with grains from Maine. “It’s very cool. It’s triple distilled and aged in rye barrels. It’s our Irish whisky and is great for winter.” Vars says that they do tend to look at seasonality and have a spiced rum for winter, a strawberry rum for summer, and a peach brandy, which is great for spring. The ﬂagship is the Silver Rum, but Vars says the current Amber Rum release is the best they’ve ever made. “Time is our ‘frenemy.’ We’re always thinking, ‘come on already, age!’ Now, we have rums coming out we’ve been waiting to become just as they are and what we wanted them to be.” 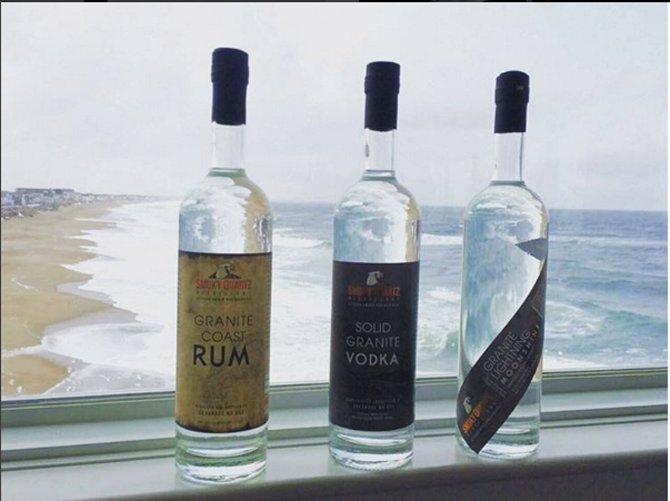 While waiting for the “all clear” after a rock and mortar attack in Baghdad six years ago, Kevin Kurland happened on a Wall Street Journal article tracing the evolution of alcohol since Prohibition. “When you’re deployed you have long chunks of boredom,” he says. “And this article was a great way to pass the time. My grandfather and uncle had a small still and I was fascinated by it. When I got back home late in 2008, I did a tour of distilleries—the big ones in Tennessee and Kentucky.

”Kurland says these commercial state-of-the art distilleries were intimidating and he wondered how he could possibly create his own small-scale distillery—until he visited both New England Distilling Company in Portland, Maine, and Sea Hagg in North Hampton, New Hampshire, and saw that he could, indeed, do it himself. He opened Smoky Quartz, named for the New Hampshire state gemstone, last year. “I created my business plan and self-ﬁnanced and I made a distillery with a much bigger capacity than I needed to start so I can expand.”

Kurland’s father and uncle, both pipeﬁtters as well as veterans, came to help get the business running. The space contains the 280-gallon steam-ﬁred still, which has been producing Solid Granite Vodka made from corn grown in the state since January, 2014. “I looked at rye, wheat, potatoes, but I couldn’t get a good supplier,” he says. “But the corn I can get from a co-op and I wanted organic. I can get what I need when I need it. And with the type of distilling I do, the used corn mash goes to a local farm. The chickens walk a little funny.”

Kurland says his recipes for the vodka and for his Granite Lightening Moonshine came from a lot of trial and error. “I did an apprenticeship with Copper Fox in Virginia and a lot of reading. I wanted something different for this vodka and mine has a lot of sweet notes like an Eastern European vodka. The moonshine is a classic Appalachian style with some ﬂavor from the corn, but the fermentables are the sugar.” Other spirits in the works are a bourbon and an apple pie moonshine.

Wiggly Bridge Distillery, named for the iconic York, Maine, bridge built in the 1930s, produces two spirits: White Whiskey and Baby Bourbon Whisky, with plenty of rye. “I like a high rye bourbon,” says distiller David Woods. “Bourbon is one of the more difﬁcult spirits to do well, so I started with that. I wanted to take a big bite out of the whole right from the start. I love the chemistry and the science. I’ve already turned corn into concrete but I came up with a good recipe.” That recipe is based on a sour mash and is distilled in a handmade, hand-rolled, and hand-riveted copper still Woods and his son, David II, made at their vacation home on Montserrat in the Caribbean after Woods announced he wanted to build a still.

Woods says that part of the success has to do with building rather than buying a still. “I saved 80,000 real dollars by building it. I’m looking at a new still and will spend only $21,000. I’d have to pay $183,000 to buy one.” Wiggly Bridge is also looking at producing a rum based on Bush Rum found in the Caribbean. “It’s like a sour mash whisky and infected with bacteria. It smells gorgeous, like bananas and roses, but it looks terrible,” Woods says.

The Baby Bourbon, aged for 10 months, will eventually become “all grown up” and their White Whisky has won awards. There are plans to expand to a larger space complete with a cigar bar and intimate chop house restaurant. Many local bars and restaurants now carry the spirits and the distillery has a line of products, including barrels, ﬂasks, and glassware, just right for enjoying an Orange Marmalade Manhattan made from that smooth Baby Bourbon. (See recipe)