It’s been more than five years since the latest rebirth of hard cider, and it should come as no surprise, especially to apple-loving New Englanders, that the industry continues to grow. Craft cideries are popping up throughout the country, with entrepreneurs putting their own twist on the gluten-free beverage, blending all kinds of apples to create a sip that’s crisp, light, and refreshing.

Cider was first consumed by the ancient Romans and Greeks. In the 17th and 18th centuries, early American settlers sipped up the brew, making use of the abundant apples. Cider production began to wane when large numbers of Germans started immigrating to the U.S. in the middle of the 19th century, bringing with them a penchant for beer. During Prohibition, many apple trees were cut down by preachers of abstinence, destroying the high tannin, bittersweet, and bittersharp heritage varieties like Ashmead’s Kernel, Baldwin, Black Oxford, and Virginia Crab.

Fast forward to 2011. With gluten sensitivity awareness on the rise, along with craft beer (in all its gluten glory), millennials began exploring other food and beverage trends, and cider beckoned. “Since then, cider has continued to mature and develop as a category,” says Michelle McGrath, executive director of the U.S. Association of Cider Makers (USACM). “You’ve got the diversity of beer and the diversity of wine in one category. People are just starting to wake up to that.”

Growth is centered on regional cider makers, whose sales increased around 40 percent in 2016. (Nationally, cider sales dipped slightly, reinforcing the fact that people are investing in their local businesses.)

During the 2016 CiderCon, a conference organized by the USACM, Nielsen—a company that studies consumer trends—reported that overall off-premise cider sales for the year were between $400 and 500 million. This compares to between $100 and 200 million in 2012.

Today, cider makers play with tannins and acidity, using apples classified as bittersweet, bittersharp, sharp, or sweet to distinguish their brands. Drinks officially taxed as cider range from 0.5 to 8.5 percent in alcohol (if the alcohol percentage is higher, they are considered wine, which is taxed differently). The Cider Act, which became national law in 2015, broadened the tax definition of hard cider, moving it from up to 7 percent alcohol by volume to 8.5 percent. The new law also permitted an increase in carbonation in the blends (from 3.92 grams/liter to 6.4 grams liter).

When the leaves change, and the familiar smells of fall and then winter fill the air—scents unique to New England—cideries press apples, fermenting and mixing their golden brews. Below is a small sampling of some notable New England cideries.

Alex Snape, owner of Far From The Tree, is brewing up a wide range of hard ciders to capture the essence of New England. It all started with a passion for making wine. Snape and his wife Denise spent years traveling around Europe, visiting places like Bordeaux and Champagne to study the winemaking process. “I fell in love with the whole idea of making something that represents your culture and where you’re from. The Europeans do that really well,” Snape says. “I took that lesson literally and tried to apply it to myself.” That led to cider, and in 2014 the Snapes released their first blend. Today, Far From The Tree produces about 60,000 gallons of hard cider, with 70,000 to 80,000 predicted for 2018.

All ciders are made with a base of McIntosh apples. In the first year, Snape mainly produced dry blends; since then, he’s branched out to incorporate more fruits and spices. “We’re always trying something new,” he says. “We like to give people a wide range of stuff. It keeps us on our toes.” The tasting room is regularly stocked with six to eight options, with rotating seasonal specials. One October featured the Halloweeny Ectoplasm—cider a bright Ghostbuster slime green from bell pepper, jalapeño, and kiwi. In the spring the Lei, a pineapple-jalapeño mixture, is available, and in the summer the Patch, a strawberry-basil blend, makes an appearance.

Far From The Tree’s flagship hopped cider, the Nova, is always on tap. Hops are added after fermentation to eliminate bitterness and balance out the acidity and sugar of the apples. Cold-weather staples include the Bog—think Thanksgiving minus the turkey and gravy. It includes sage, rosemary, thyme, and cranberries, which give it its tart backbone. With the December release, Cord, Snape incorporates elements of three different trees: fruit, wood, and sap. McIntosh apples are aged in American oak barrels and mixed with Massachusetts maple syrup for a rich winter blend.

Longtime plant collector David Buchanan, after years of studying and tasting the various indigenous apples and berries on his 117-acre farm and in the fields of Maine, is seeing the fruits of his labor in a whole new way: hard cider. “It’s a natural complement to exploring all these fruits,” he says. “I’m really interested in the resurgence of cider—producing a product. It wouldn’t be nearly as interesting if I were just collecting the fruit.”

Buchanan began gathering early American apples (Virginia Crab, Harrison, Baldwin, and Golden Russet) and foraging for wild berries around the state, often knocking on strangers’ doors if he saw something on their property he thought he could use to make his cider. In 2015, Buchanan had enough fruit to create his first batches of hard cider. By April 2017, he’d opened a tasting room on the farm to share his artisan small-batch blends. Less than 2,000 gallons are available from his 2015 harvest, with some produced in limited five-gallon quantities.

The Original Dry features a blend of Baldwin, Northern Spy, Jonagold, and Liberty apples. The Aronia (a native shrub) includes the aronia plant’s superfood berries and elderberries, which are mixed into a base of hard cider, creating a beautiful amber drink. For another unique pour, try the Ridlon small batch varieties. Buchanan released two new blends from the 2016 harvest this fall that contain foraged wild seedlings and crab apples. “Within that one Ridlon brand, there’s a whole range of different experimenting,” says Buchanan. “The reality is, these aren’t really replicable. I’m trying to create a wide range of experiences with ciders I like.” Check them out at the Portersfield Cider tasting room, or in select retail locations in Portland, Maine. 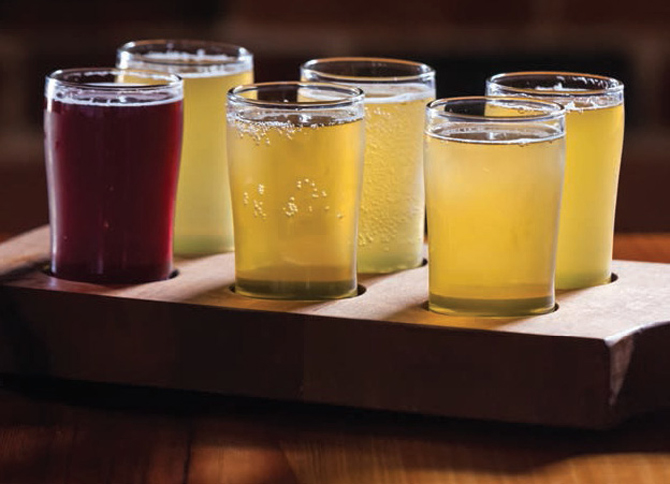 When it comes to crafting flavorful hard cider, North Country Hard Cider Company co-owner Silas Gordon created a product with mom in mind. In 2014, Gordon partnered with his brother, Ivan Gordon, and best bud, Ron Dixon, to launch the business and produce a product with no additives or sulfites—the way the Gordons grew up eating. “In a store and buying anything with my mom, we always had to look at the ingredients and make sure it was mom-approved,” says Gordon. “You realize later on in life what people are putting in their bodies. I really have a lot of respect for my mom.”

Each batch of North Country cider is made with two primary ingredients: apples and yeast. About 75 percent of North Country’s apples are sourced from Maine, with others coming from New Hampshire and upstate New York. The Original Press features five types of apples (from antique to the more common varieties), and has a clean, crisp, apple taste.

If it were possible to bottle the essence of Valentine’s Day, the Gordons and Dixon may have accomplished just that with their Fire Starter blend. The cider is made year-round and features cinnamon, habanero peppers, and pomegranate. Think of those red heart candies. For a taste of Christmas, the Northern Comfort is North Country’s version of a mulled cider—it’s infused with warm spices like nutmeg and ginger, with a hint of orange zest. Only about 500 gallons are made each year and they do not last long.

But North Country keeps around nine other ciders on tap at any given time and brings seasonal creations in and out. Going into their fourth year in business, the partners have come a long way from when they first started making cider as a hobby. They’ve produced about 30,000 gallons of cider so far in 2017 (compared to 9,000 in their first year) and recently began canning their blends, which are available in retail locations throughout the New Hampshire Seacoast. 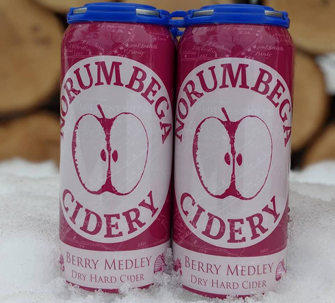 Noah Fralich, owner of Norumbega Cidery in New Gloucester, Maine, is crafting ciders New England style and paying tribute to the land’s heritage. The Fralich family has planted several acres of apple trees on their farmland to bring back some of the traditional cider apples that have been lost throughout time, including Black Oxford, Ashmead’s Kernel, and Dabinett. “There’s a lot of interest in cider, but there’s not nearly enough cider fruit to meet that demand,” says Fralich, who established his business in 2013. “For those brands that have to source those commodity apples, the ability to make a high-quality cider with a lot of flavor and no sugar is more of a challenge.”

All the Norumbega ciders are crafted almost exclusively from Maine apples and are fully fermented, giving them a clean, tart taste. Fralich currently produces four blends, which are primarily available in retail stores in Maine and farmers’ markets in Brunswick and Falmouth. The Classic Dry cider contains dessert, culinary, and cider fruit to create a crisp, dry drink. Warm up during the colder months with the Spice cider, which includes mulled spices; try a slice of orange on the side. In the spring or summer, go for the Berry Medley cider. Comprised of blueberries, blackberries, raspberries, strawberries, and of course apples, it has a beautiful rose color and is great to sip on a warm day. Norumbega’s Honey cider is fermented with 100 percent Maine honey and includes just enough of the syrup to not disrupt the dryness of the cider.

Cider Trail
There are plenty of places to keep your glass full throughout New England. And after the latest harvest season, there’s no better time to explore what local purveyors are crafting this year. Try these below, or, for a complete list of New England cideries by state, visit ciderguide.com.